JPY Up, EUR Down as rates Decline; U of M Consumer sentiment 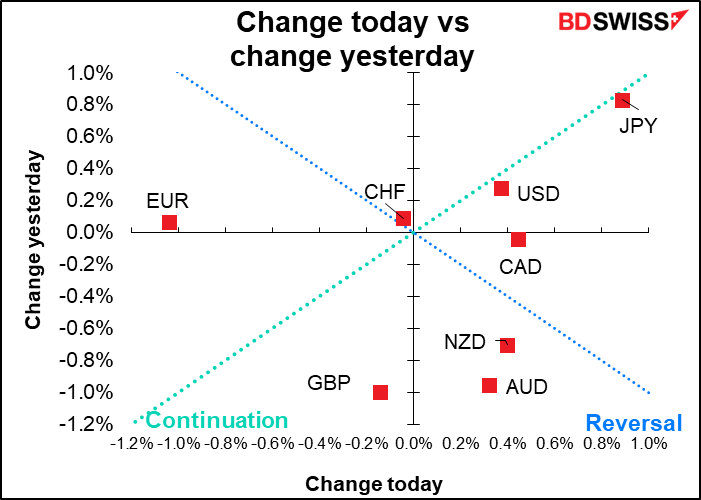 Volatility remains the name of the game. The NASDAQ index for example was up 1.6% at one point yesterday, then down 2.1%, then closed more or less unchanged (+0.06%). Similar movement for the S&P 500 – at its lows it was just shy of a 20% decline from its recent record high, which would’ve marked the formal start of an official bear market.

Similarly with the ultimate speculative vehicle, Bitcoin. After being down 10.1% on the day at one point it bounced back by some $5,000 or 20%. At the time of writing it’s trading up 7% from Wednesday’s close.

I can’t speak to why Bitcoin is falling – except of course its 70% correlation with the S&P 500 nowadays – but stocks are falling on growth fears. The markets are getting concerned about the prospects for growth. You can see that in the performance of long bond yields, which have been coming down over the last few days. 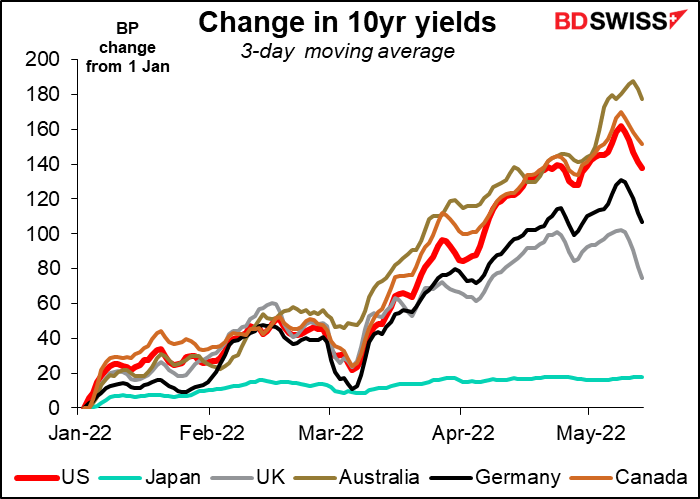 After weeks and weeks of revising up estimates of the Fed’s likely hiking path, the market once again revised down its estimates yesterday. 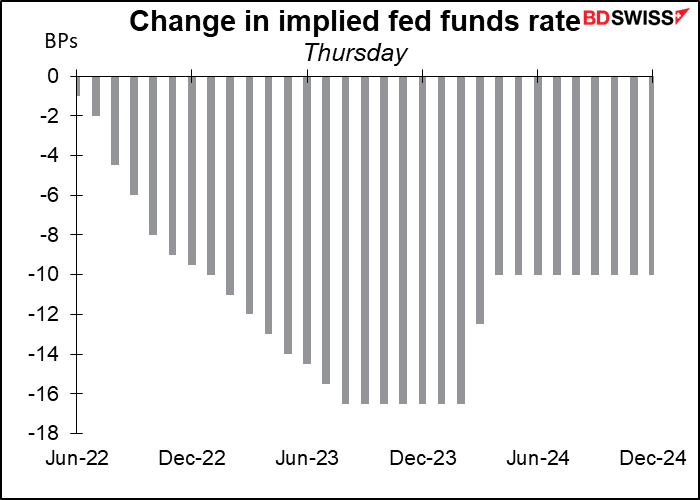 The change in rate expectations over the last week has been quite dramatic. The market is still far above the FOMC’s estimates for the end of this year, but now pretty much in line with official thinking for 2023 and 2024. That is, they think the Fed will have to tighten by more than planned this year but that’s likely to slow the economy enough to meet their goals for 2023 and 2024 – probably by throwing the US economy into recession. 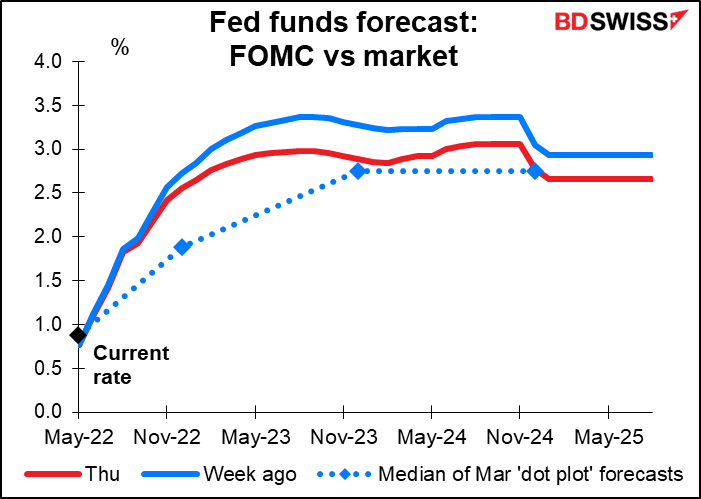 The change favors JPY, for two reasons. One, the volatility and the fear make Japanese investors more nervous. Under such conditions they tend to hedge their currency exposure enormous portfolios of overseas bonds, which causes the yen to appreciate. Other investors have long since noticed this behavior and tend to jump on the bandwagon, which is the origin of JPY’s “safe haven” behavior.

Secondly, falling bond yields elsewhere decrease the atraction of investing in foreign bonds for Japanese investors. Expectations for future outflows are revised down and JPY appreciates.

I’m still not convinced we’ve seen the peak for USD/JPY though.

On the other hand, the war in Ukraine continues to weigh on EUR. Dutch natural gas prices jumped after Russian state-owned gas-supplier Gazprom said it will cut shipments through the Yamal pipeline to Germany because of Russian-imposed sanctiosn on European companies. German economy Minister Robert Habeck said “the situation is escalating” and that supply had dropped by 10mn cubic meters a day or 3%. The gas price later fell back but EUR failed to recover. The comovement of the two is more evident with EUR/CHF than with EUR/USD.

Meanwhile, EU diplomats are considering moving ahead with the sixth package of sanctions against Germany but without the ban on all imports of Russian oil, to get around Hungary’s objections to that ban. (Sanctions have to be agreed on unanimously.) This would be a big setback for the EU’s efforts to sanction Russia as it would eliminate the most effective tool that the EU has to punish Russia, albeit at considerable cost to the EU economies.

A stronger yen, a weaker euro…my daughter’s university in Japan just got a lot more expensive for me today. 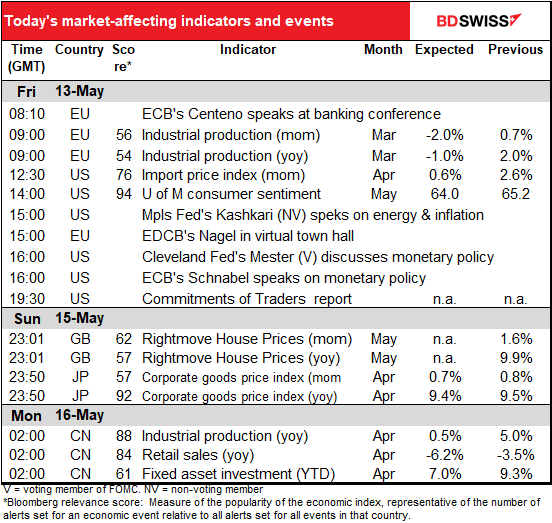 The day starts out with the EU industrial production. It’s not a biggie but I have seen it move the market. 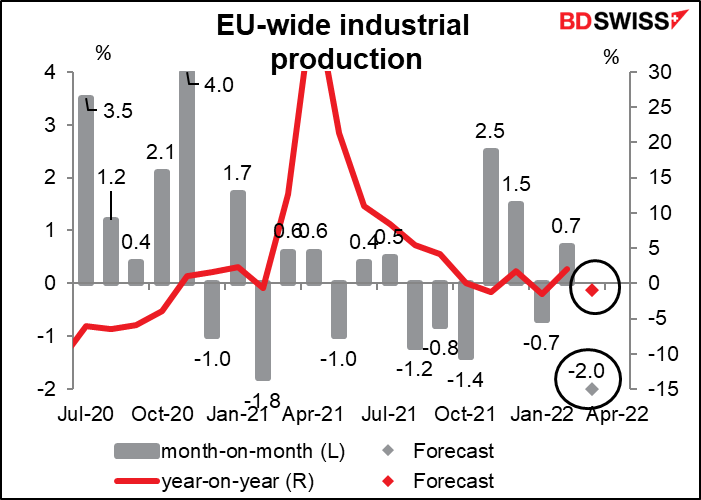 The EU has been doing well on this score but today’s indicator is expected to drag it down to below its pre-pandemic level of output. Given the problems stemming from the Ukraine war, that’s hardly surprising. 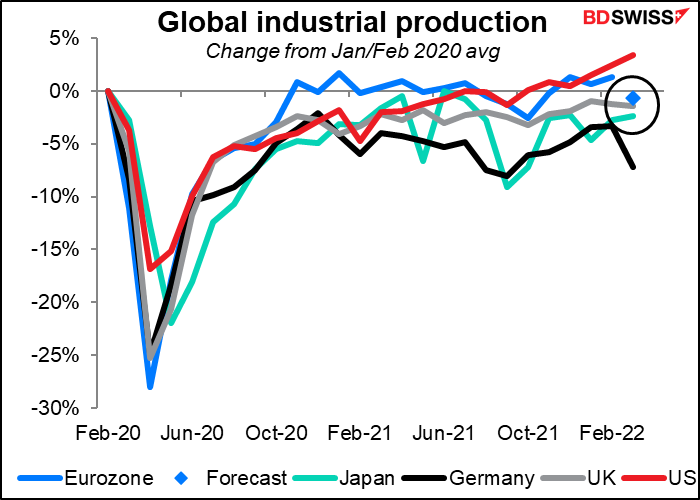 US import prices aren’t usually a major indicator, but with the market’s focus squarely on inflation, it could be market-moving today. There’s no relation between import prices and the US CPI. 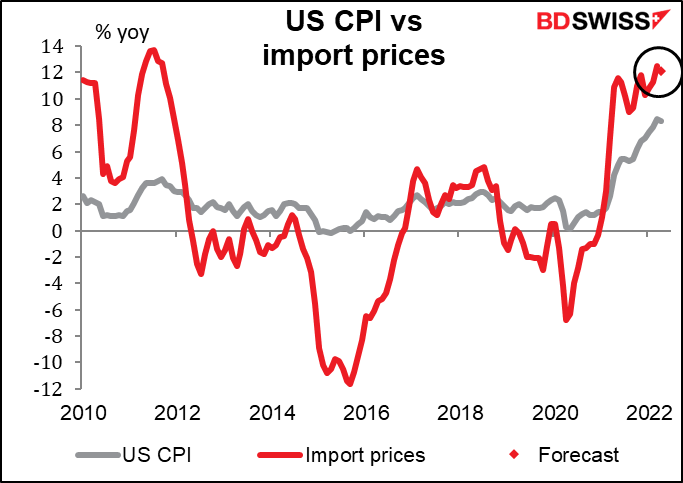 Import prices excluding petroleum seem to correspond better, although with services taking up 60% of the CPI basket it’s obviously not the main determinant of inflation. 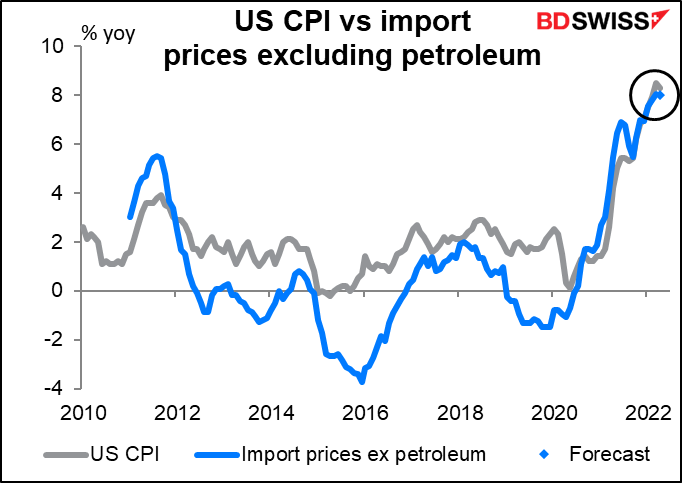 Import prices ex petroleum in turn seem to be largely determined by China’s producer price index. This is why Chinese inflation is important for the rest of the world. Later we get the University of Michigan consumer sentiment survey. The market puts a lot of weight on this indicator, as you can see from the high Bloomberg relevance score, but in fact it’s just interviews with 500 people. Furthermore I’ve never seen any indication that sentiment predicts spending or anything else.

Sentiment is forecast to be down a bit, which is natural given the still-high inflation rate. 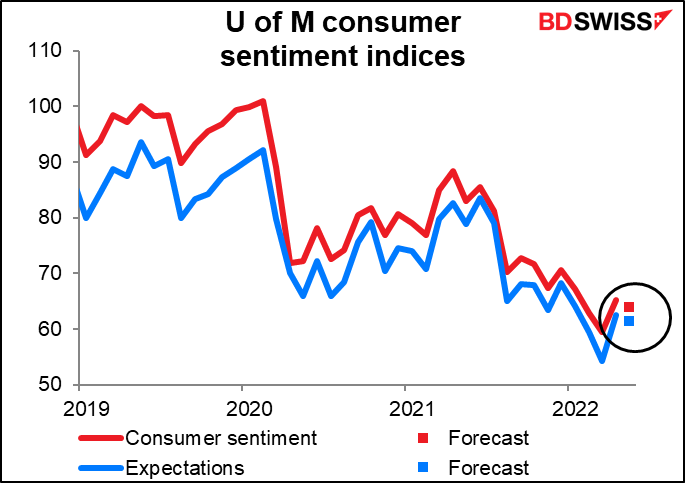 Speaking of which, inflation expectations are forecast to tick up a bit. 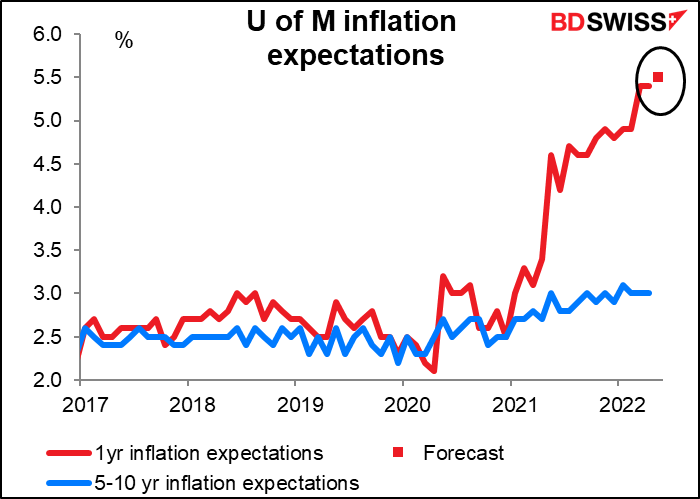 Then we go into the weekend, go to the beach, get sunburned, spend Sunday in agony.

I hope you’ve recovered by Sunday night European time, Monday morning in Asia, when the Japan corporate goods price index (CGPI) (aka producer prices) is released.  The month-on-month rate of growth is forecast to remain the same, but the year-on-year rate is forecast to decline a bit. 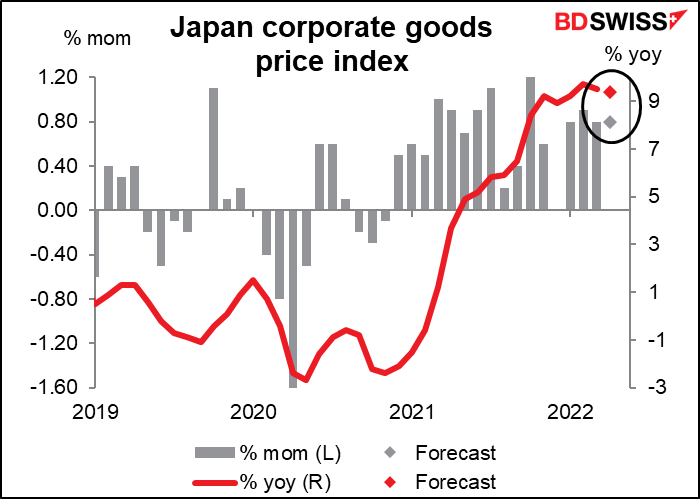 We’ll be particularly watching what happens with raw material prices, which have been soaring. They were up 50% yoy in March. This is down a bit from the peak of 69% yoy in December, but it’s still ruinous. Nonetheless there’s no sign that the Bank of Japan is willing to countenance a higher yen to make up for this, as we saw from Wednesday’s Summary of Opinions from the April Monetary Policy Meeting. 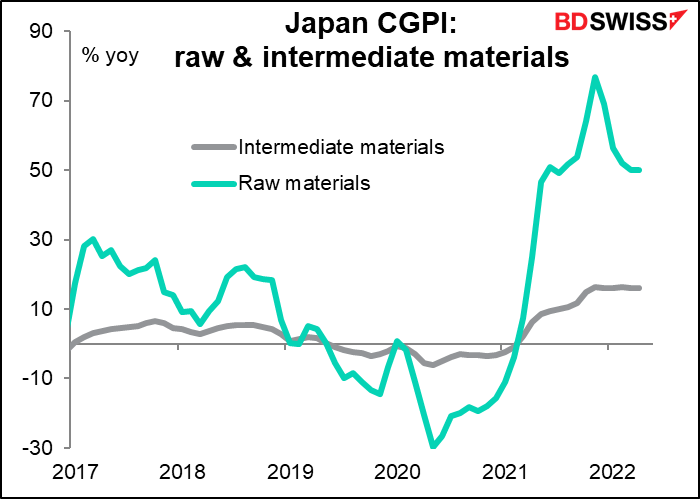 There were several comments that showed Monetary Policy Board members were aware of the possible impact of higher raw material prices on inflation, but not concerned. “The underlying inflation rate is likely to rise moderately due to increasing moves by firms to pass on a surge in commodity prices to retail prices, changes in firms’ and households’ mindset regarding prices, and a possible strengthening of upward pressure on wages amid intensifying labor shortage,” one member aid. “Inefficiencies in trade and logistics resulting from the situation surrounding Ukraine, coupled with a surge in commodity and other prices, may continue to affect a wide range of goods prices in Japan,” said another.

But skepticism seemed to be the dominant view. “Although the possibility of the inflation rate reaching 2 percent has increased, the rise in inflation is due to higher import prices and therefore will be only temporary. Achieving the price stability target in a stable manner is difficult given developments in the output gap and inflation expectations,” said one member. (“Difficult” is a code word in Japanese for “no chance, mate.”) And another member even pointed out the risks from falling commodity prices: “The year-on-year rate of change in the CPI is likely to be at around 2 percent in the first half of fiscal 2022, due mainly to a surge in commodity prices. From the second half, however, attention needs to be paid to downside risks brought about by possible declines in commodity prices.”

We also get the big three Chinese indicators of industrial production, retail sales, and fixed-asset investment (FAI). They’re expected to be lower, which is no surprise – it’s hard to go shopping or get to work when your door is welded shut. The only question is how far they’ll fall. 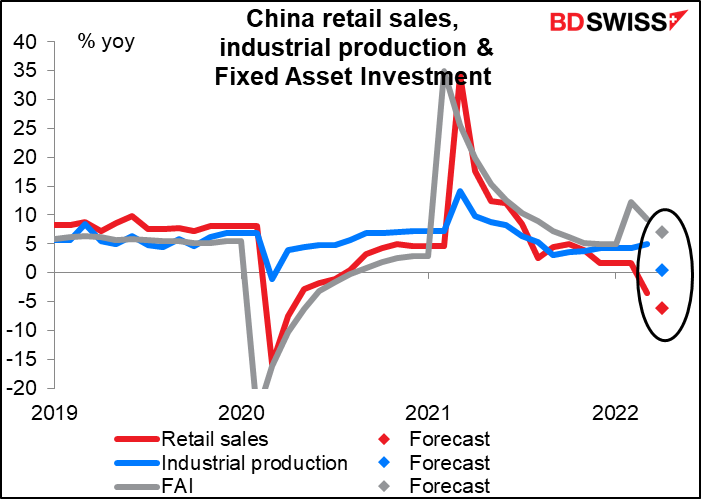 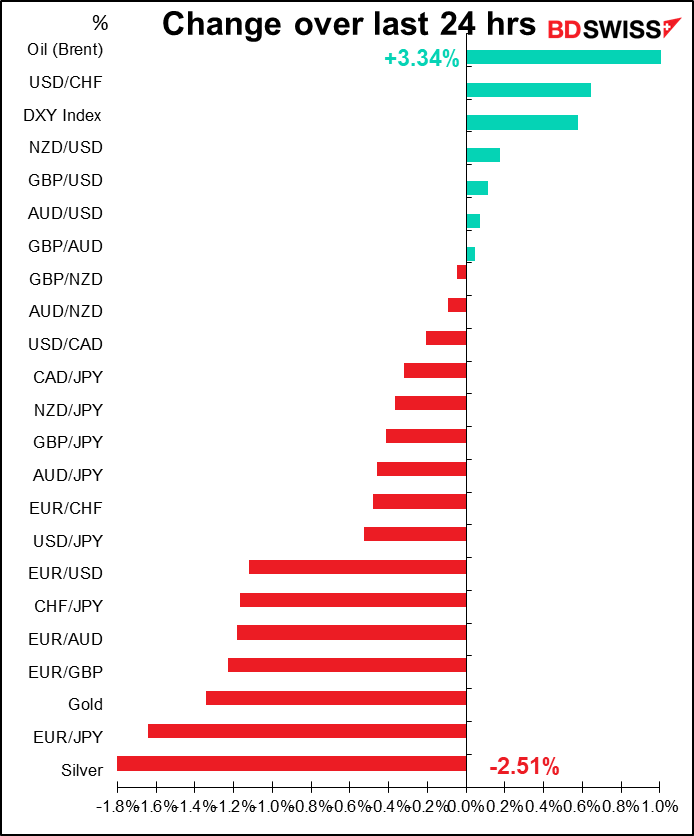 NZD Up as bond yields unchanged, EUR Down on poor PMIs; Ifo, US new Home sales

BDSwiss Copyright © 2022 BDSwiss All Rights Reserved
Risk Warning: Trading in Forex/CFDs and Other Derivatives is highly speculative and carries a high level of risk.
Close
We use cookies to ensure that we give you the best experience on our website. If you continue to use this site we will assume that you are happy with it.Ok